On the 19th of November, the first games of the 5th leg of the FIDE Women’s Grand Prix Series were played in Khanty-Mansisyk.

The Governor of Ugra Natalia Komarova and CEO of FIDE Geoffrey Borg made the first honorary moves in the Russian derby Pogonina-Girya. 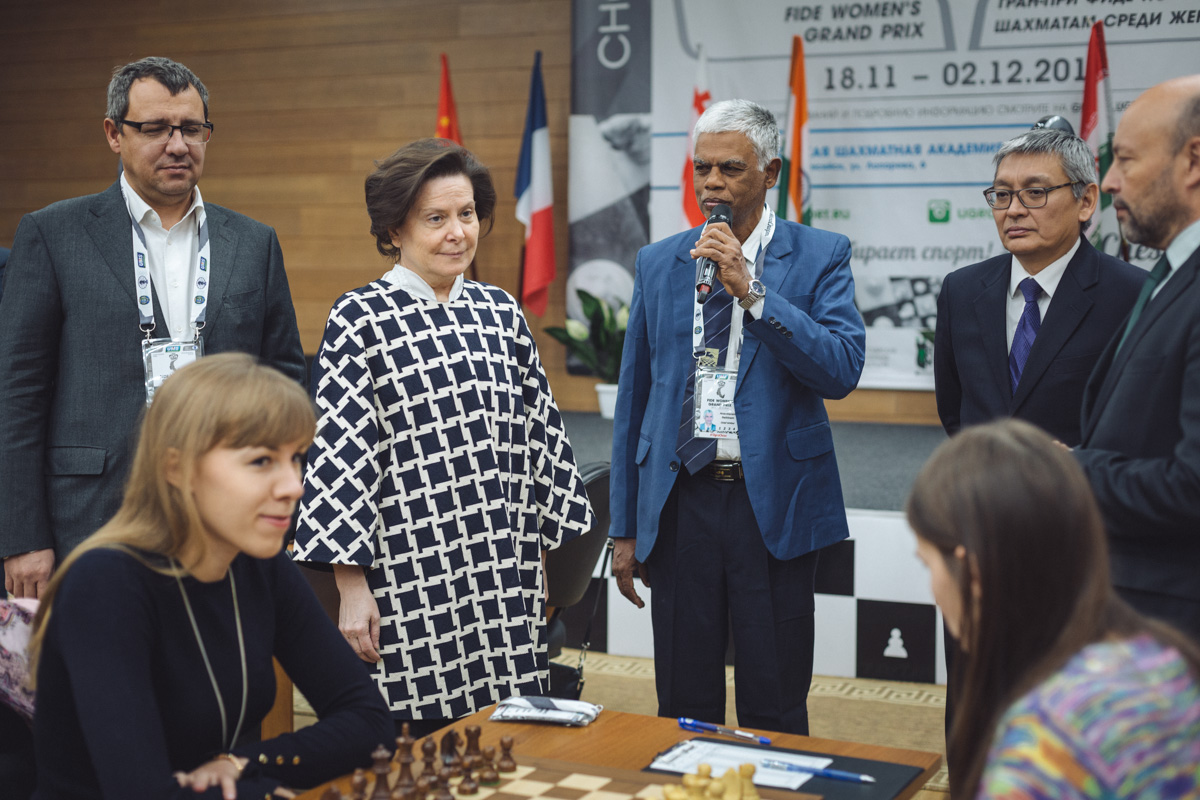 Although the first honorary moves had been 1. e4 – e5 and then the fight started with 1.d4 d5, it seemed that the Governor’s taking part in the game helped Ugra’s representative Olga Girya win convincingly.

In a rare line of the Slav Defense with the white knight standing on e2 instead of f3, Black managed to take a pawn on c4 in a fortunate moment, and it appeared quite difficult to win it back for White.

Black improved her pieces and pawn structure methodically and gained a solid edge. Being in a time trouble Natalija missed a trick and her position deteriorated close to losing. 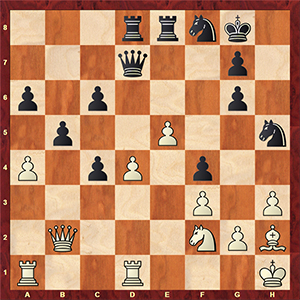 At the press conference the players confessed that they have played a lot against each other and have a great a lot of history behind, so it wasn’t a problem for them to play the 1st round’s game. 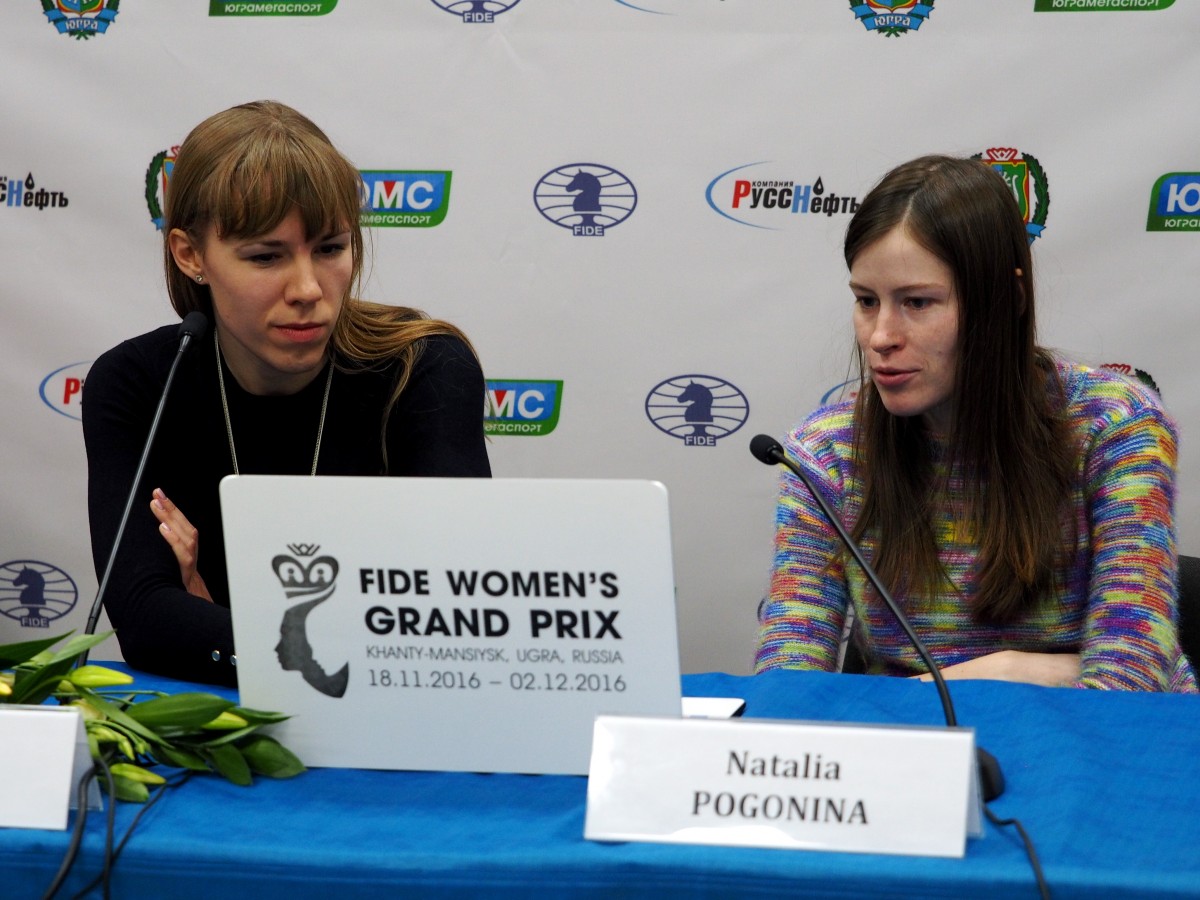 One of the leaders of the series Valentina Gunina outplayed Lela Javakhishvili with White in the Catalan opening.

The game went on quite smoothly and reached an endgame with rooks and pieces with an extra (but very weak) pawn on a2 for White. Still Black had very good chances for a draw due to the so-called advantage of two bishops.

As the Georgian chess player confessed after the game, her crucial mistake was the decision to exchange the rooks: 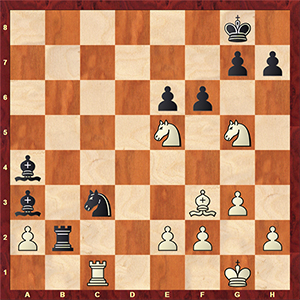 In the time trouble Black made one more mistake, which led to their quick capitulation. It was better to play 31…fxg5 not allowing the white pieces gain initiative on the kingside. 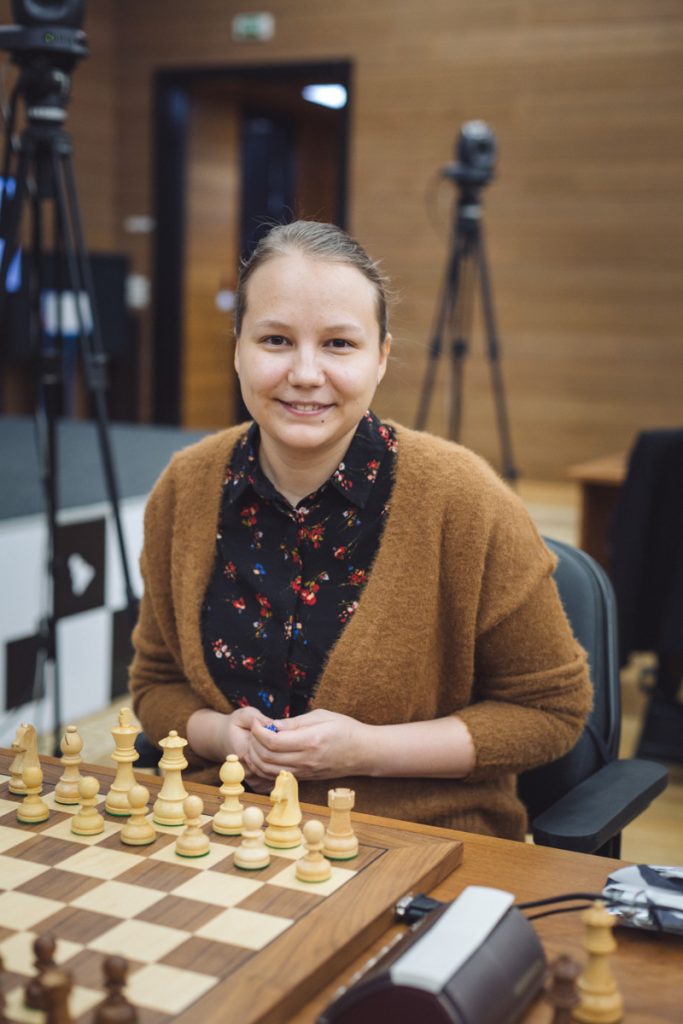 The second national derby of the round between Nino Batsiashvili and Bela Khotenashvili ended in favor of White. The opponents played a quite sharp line of the Gruenfeld Defense, where Black managed to organize a strong and dangerous play in the center and on the kingside. Nevertheless, Bela spent much time for finding best solutions and got into a time trouble. In a position with unequal material correlation Black made a mistake which helped White seize the initiative. 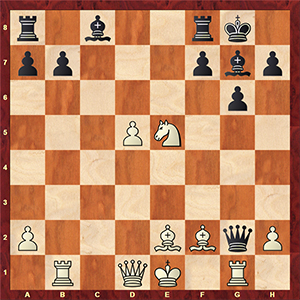 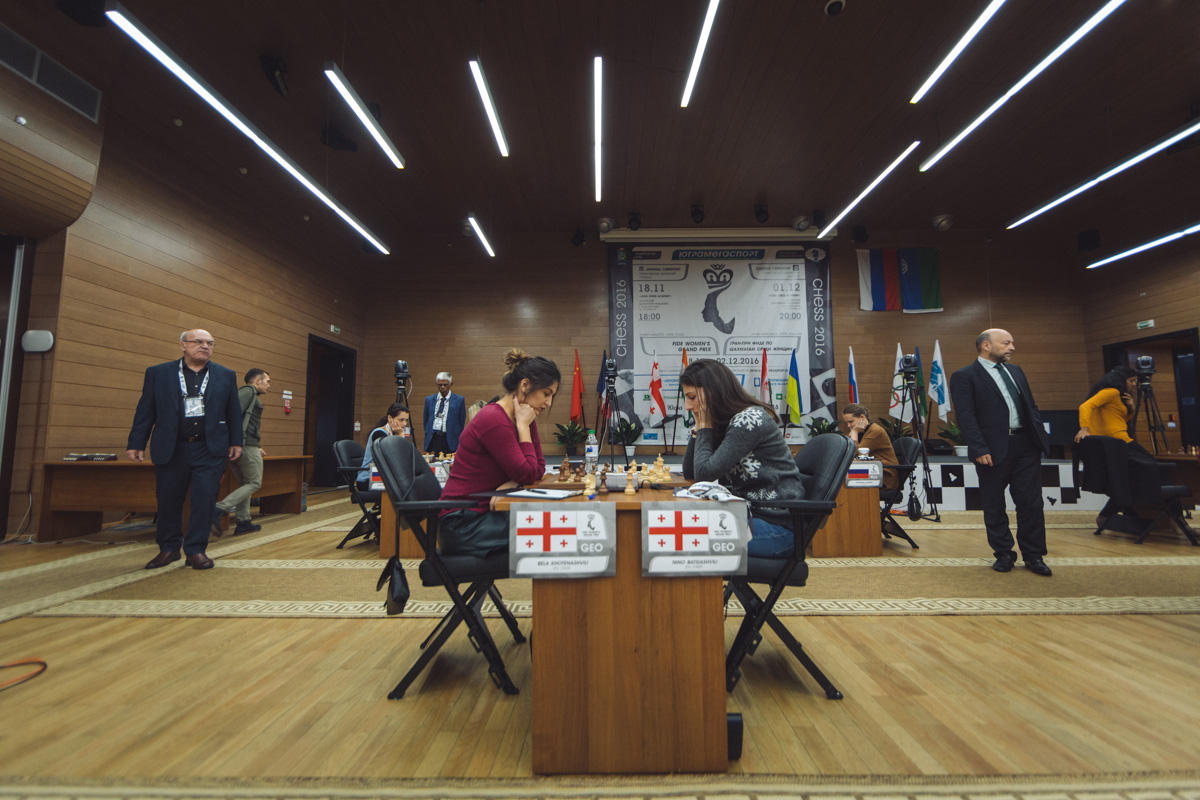 A very complicated game was played by Natalia Zhukova and Ju Wenjun in the English Opening, which at some point acquired a form of Ragozin. Although both players assessed the position to be very complicated and dangerous, it maintained to be more or less equal. White was trying to arrange some active play in the center and on the kingside while Black was pushing on the queenside.

In the time trouble the game sharpened a lot, but the grandmasters were up to task, making the only moves, and at last each side promoted the pawn. White managed to take two black pawns with his new queen, but white king’s vulnerable position didn’t allow Natalia to play for a win: Ju Wenjun secured a draw with the perpetual.

After the game the Chinese player confessed that she feels a certain pressure being one of the leaders of the FIDE GP series, but she is planning to play games one by one and make her best. 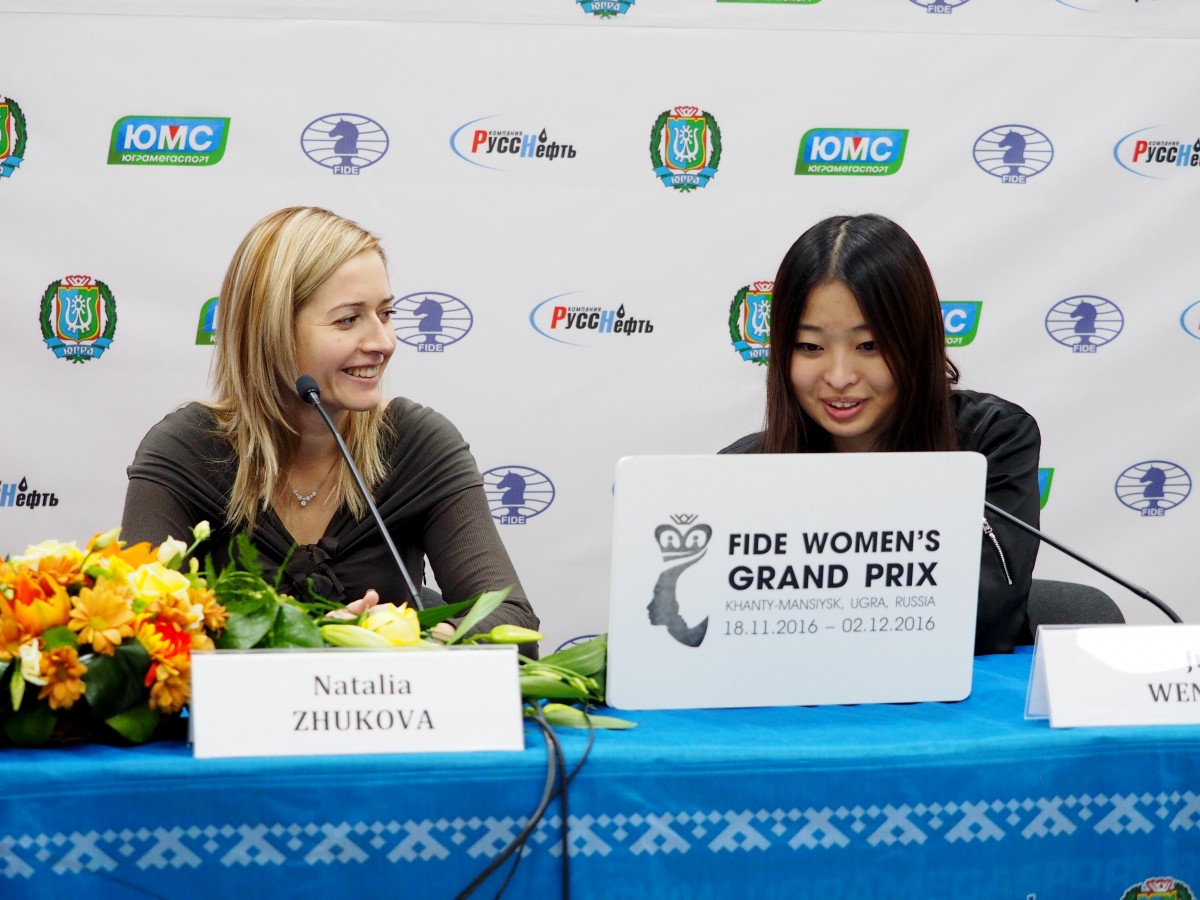 A very solid play happened in the encounter between Sarasadat Khademalsharieh and Harika Dronavalli. In the Moscow variation of Slav Defense the position didn’t really push the limits of equality, Black managed to get a comfortable play, and on the 31st move the opponents agreed to a draw.

It’s the first time for Sarasadat to play in Khanty-Mansiysk and she confessed that the weather was really cold for her, but everything, including the playing hall, was fine. 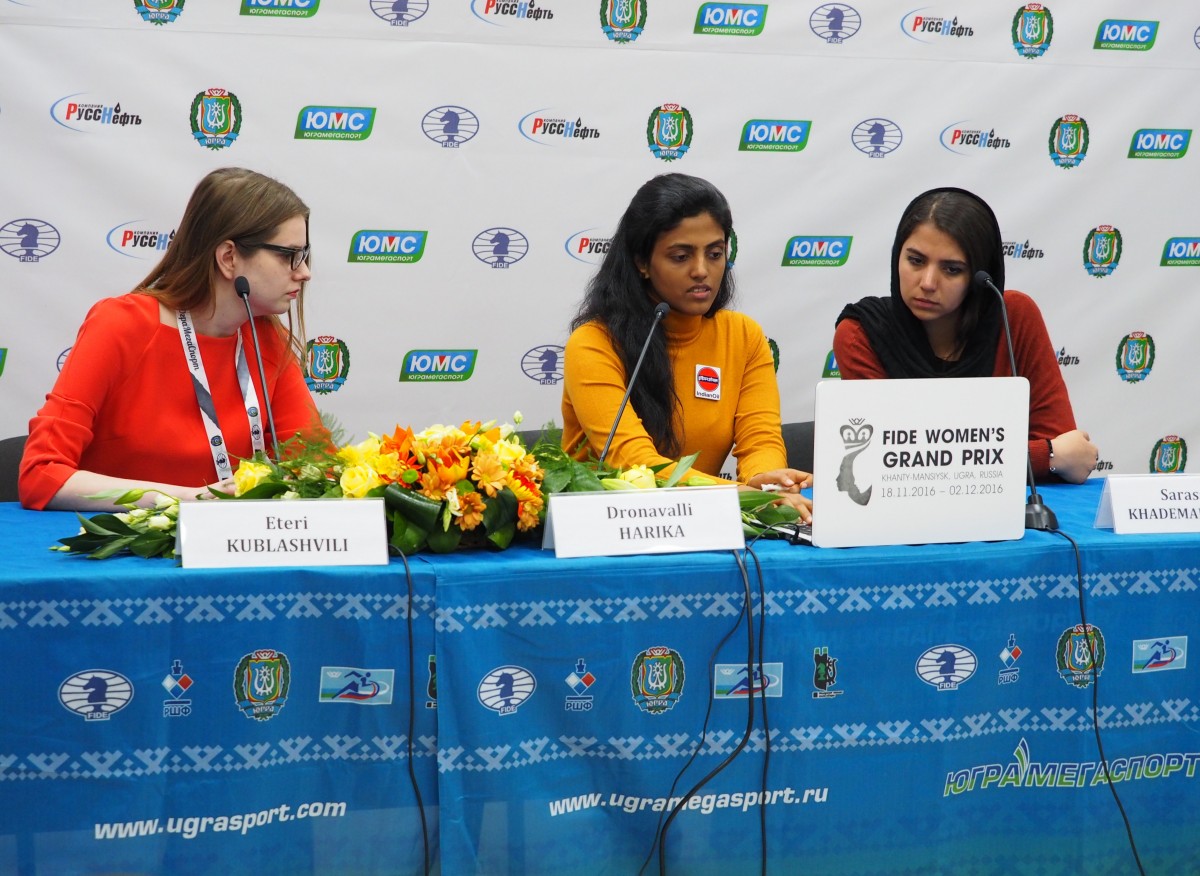 A quick draw occurred in the game Skripchenko-Kosteniuk. The players performed a threefold repetition in the Scotch Opening and agreed to a draw on the 13th move. 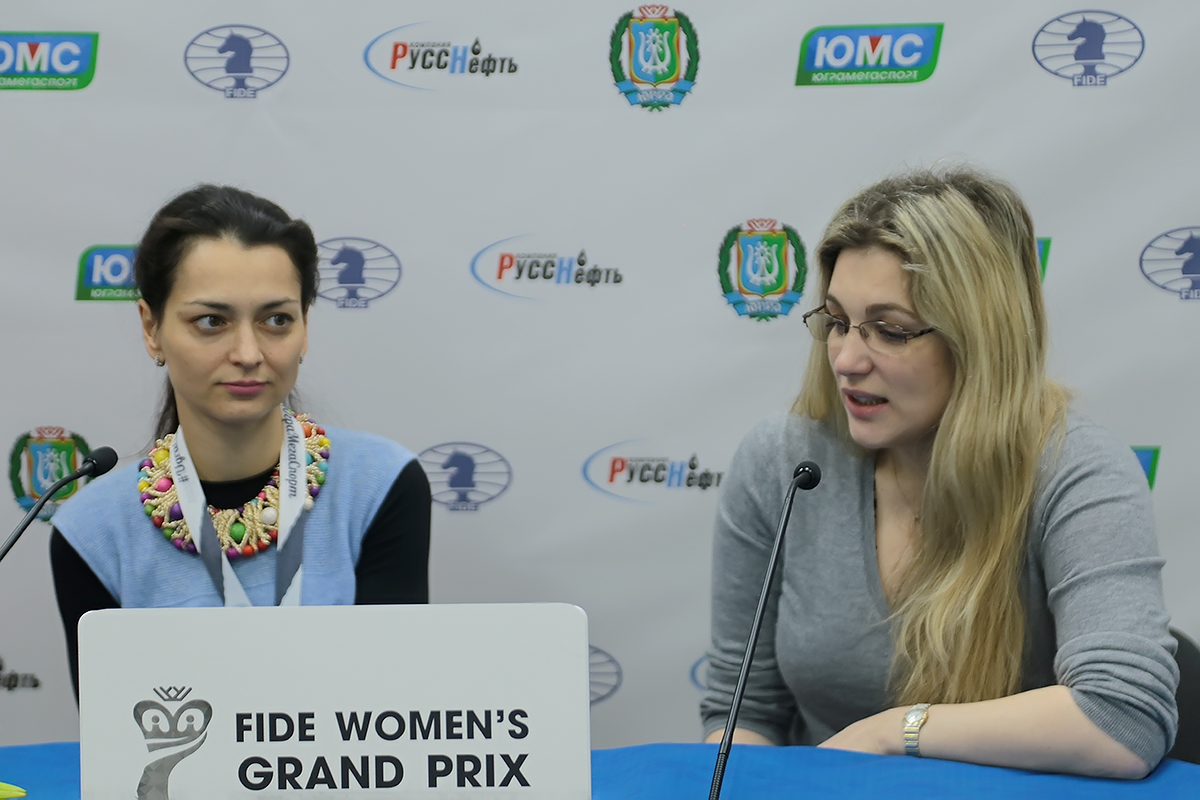